Buckeyes Goal-Line Stance In OT Erases A Scare In Madison 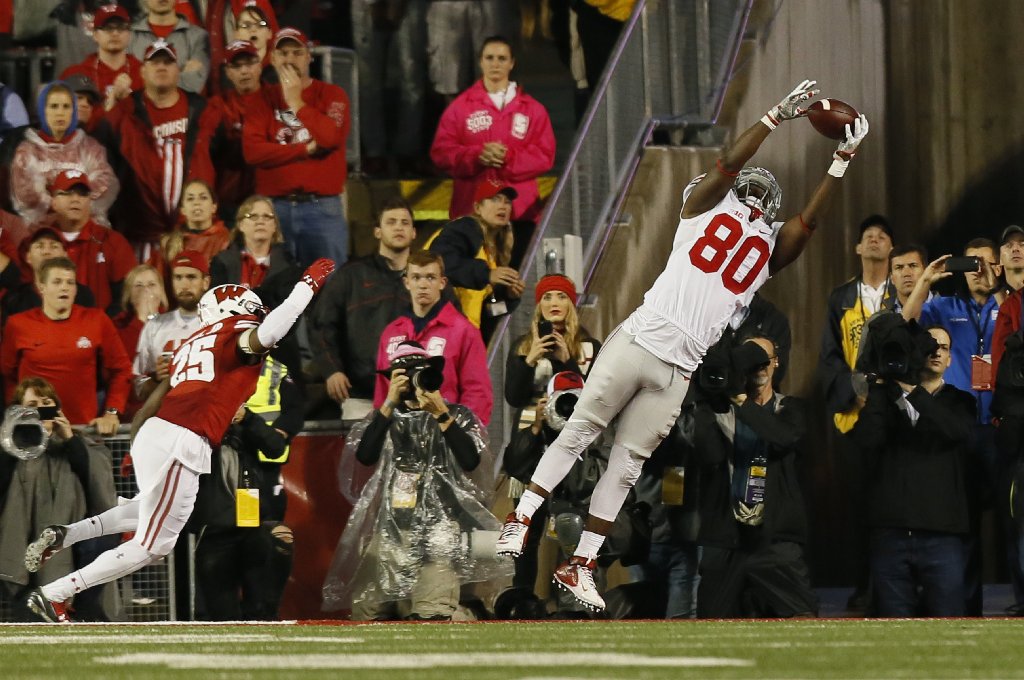 The evening in Madison began, frankly, terrifyingly. The images floating in all of our minds were that it just wasn’t going to be the Buckeye’s night.
The Badgers completely dominated the first half. The Buckeyes’ passing game was nonexistent. And, perhaps the worrisome part for all of us die-hards was that the defense, a source of excitement and optimism throughout the season, seemed to have hit a wall and knew not how to respond.

Camp Randall Stadium was filled to the brim, 81,541. They were loud and supportive of their team too.

But even when the Badgers shined, taking advantage, the Buckeyes did not wither – they fought and stayed close.

In OT Noah Brown set the evening into its rightful destination with a spectacular seven-yard reception from JT for the score. Tyquan Lewis would lift us all from our swollen seclusion as we fearfully watched what could have been …. sacking Alex Hornibrook on fourth-and-goal from the 4. The Buckeyes had a 30-23 victory.

The Buckeyes overcame two crucial penalties on their touchdown drive in the OT period. Curtis “Everything” Samuel though delivered (as I feel he does more often than not) with an 11 yard reception from Barrett which would be the prelude for Noah Brown’s catch on third-and-two, which would make it 29-23 with the Buckeyes leading.

The 8th ranked Badgers (4-2, 1-2) on their possession had first and goal from the four after a 21-yard completion to Rob Wheelwright. It would be all they were allowed by the stingy Buckeyes defense.

In truth, it hardly appeared that it would be taking such a course after the performance we witnessed in the first half – trailing 16-6 at the half, and being totally dominated. But, as is the case, often, for the Buckeyes, after a “certain” Urban blistering lecture in the locker room, things were righted come the third.

Overcoming an interception in the end zone by Barrett on the first drive of the second half – right after the skies opened and the rain poured – the Buckeyes scored touchdowns on their next two drives to take a 20-16 lead.

JT scored on a 1-yard keeper to cut the deficit to 16-13. After Gareon Conley intercepted an Alex Hornibrook pass at the Wisconsin 38, Barrett would score again on an 8-yard keeper after avoiding the grasps of the pesky Badgers linebacker Jack Cichy.

Ohio State’s defense, which had been torched for 313 yards in the first half, allowed only 11 in the third quarter.

But just when it looked like Buckeye fans could relax, the Badgers shot back to life. Hornibrook connected with Jazz Peavy for a 36-yard completion on third down to start the drive and the Badgers went 81 yards to regain the lead 23-20 with 7:59 left.

Ohio State responded with a drive for a field goal set up by a broken-play 43-yard completion from Barrett to Dontre Wilson. This drive slammed in neutral at the 14 and Meyer elected to have Tyler Durbin take the matter in hand (or foot) with a 31-yard field goal as the clock showed 3:57 left in the game.

The Buckeyes appeared to have dodged a bullet when Conley was originally ruled to have intercepted a pass at the Ohio State 20 intended for Rob Wheelwright. It would be upon further review the ball was ruled to have hit the ground. The Buckeyes would force a punt anyway.

Wisconsin dominated the first half from start to finish, outgaining Ohio State 313-172. But it seemed much more than that as we witnessed the butchery in its act.

In the first, Ohio State stayed almost entirely on the ground. But even the Buckeyes’ ground game, which has been rather successful throughout this season, withered some. The Badgers were successful in preventing the Buckeyes from getting on the perimeter.

The Badgers’ offense shined with a tremendous performance by RB Corey Clement who on 25 rushes delivered with a fantastic 164 yard game. Jazz Peavy, WR, on end-arounds would also shine on the ground that on 6 rushes had 70 yards (a 11.7 yard avg.). It seemed as if the week off prior was sitting well for Wisconsin.

Clement’s 68-yard carry down the left sideline set up Hornibrook’s 24-yard touchdown pass to Peavy that completely silenced Buckeye Nation as Wisconsin jumped to a 10-0 lead.

Perhaps the most questionable call in the evening came with a 15 yard penalty against Urban Meyer for interference on the sideline after being hit in the face by a referee …. Too close to the action (??). The issue is only being mentioned because of the likelihood of its play time it will receive across sporting broadcasts across the nation. All we know, ultimately, is Urban, took one for the team.

One of the more excitable statistics of this game was that the Captain, JT, broke Braxton Miller’s all-time school record with his 89th TD pass; Congratulations Captain!

The Buckeyes now head to Penn State on October 22 for a scheduled 8:00 p.m. kickoff.

I will see you there!