Saturday in Columbus promises to be a great time – or a torturous adventure …. We WILL find out. So be sure to cozy up to the television at 3:30 pm and tune in Fox. Penn State is in town.

Both programs are storied with a rich history worthy of bragging. The programs have met eight times before 1993which is when the Nittany Lions joined the Big Ten. The Buckeyes lead the series 17-14.

The Penn State Nittany Lions won the first four meetings in the series. Though it wasn’t scheduled as it may seem but throughout a long span; 1912 – 1964. The first meeting between the two schools was held in Columbus, Ohio on the 12th of November 1912. They would shut the Buckeyes out – winning 37-0. The game has been officially recorded as a forfeit by Ohio State. The first time they met up in State College was the era of Disco, 1976. The Buckeyes bested the Nittany Lions by a score of 12–7.

In 1980, the two schools played in their first and only postseason bowl which was the 1980 Fiesta Bowl. Ohio State’s record was 9–3 while Penn State held onto a 10 – 2. The Nittany Lions would pull off the victory at the Sun Devil Stadium in Tempe, Arizona, 31-19.

After the 1980 Fiesta Bowl, Penn State and Ohio State did not meet again until Penn State joined the Big Ten in 1993. Ohio State won the first conference meeting, 24 – 6. Through the years of 1993 and 2000 the Buckeyes would win five of eight games. In 1995, the Nittany Lions dropped a thriller to the Buckeyes 28–25. In 1996, the Buckeyes again won in a wider margin – 38–7. The Nittany Lions got revenge the following year (1997), ranked No. 1 at the time and into November before losing to Michigan, came back from 27–17 to win 31–27. The two teams would in the next two matches; while the Buckeyes won it 2000 in a dominating manner – 45-6. This was the most lopsided Ohio State win over Penn State and the second largest margin of victory for either team. 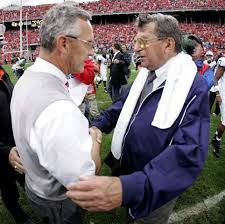 Within this time – frame there were many fantastic games between the two schools. The Buckeyes would go 6-3 with Jim Tressel leading the Buckeyes. But a vacating of a win in 2010, which would have been the Buckeyes’ seventh win in 2010, along with that entire season, due to a result of players receiving improper benefits. The Ohio State University won seven Big Ten titles in this time frame (shared or outright). Penn State Penn State shared titles in 2005 and 2008 with Ohio State.

A victory in 2001 gave Paterno his 324th career win and the record for most wins by a coach in NCAA history.

In 2005 The Nittany Lions was an underdog despite trouncing then-No. 18 Minnesota Golden Gophers 44–14 the week before and being undefeated. However, Penn State played defense and shut down the Buckeye ground game. With the help of a loud and lively home crowd, Penn State upset the then-favored Buckeyes 17–10 in State College. The noise level of the stadium as a factor in Ohio State’s defeat gained national attention and respect for the Penn State student section, giving birth to the “Whiteout” tradition at Beaver Stadium. 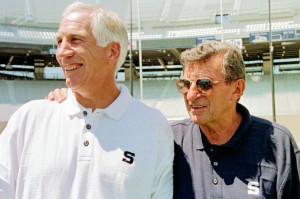 After the 2010 season, it was revealed that several Ohio State players, most notably QB Terrelle Pryor, received improper benefits. Following an investigation a determination resulted in that Jim Tressel was in the know and did not notify the School, or the NCAA. Coach Tressel resigned his position and Ohio State vacated all of its wins from the 2010 season, including its win over Penn State, its Big Ten Title, and Sugar Bowl win.

The 2011 season began a new era in the rivalry with new additions to the Big Ten conference, as well as new head coaches for both teams. Nebraska entered the Big Ten, and the conference split into two six-team divisions. The Buckeyes and the Nittany Lions were placed into the “Leaders” Division – as a result of this decision they will meet up annually until the Good Lord says differently. In this 2011 Luke Fickell was named the interim head coach for the season after Tressel’s resignation and Tom Bradley filled in after longtime Penn State head coach Joe Paterno was fired 9 games into the season following the uncovering of the Penn State child sex abuse scandal (Paterno would not have made it to 2012 in any event, as he died on January 22, 2012 – though speculation circulates he died because football was his life and his heart was broken). Both schools were ultimately given postseason bans for the 2012 season (Penn State’s ban was slated to extend through 2015, it was lifted on September 8, 2014. The Ohio State University vacated its wins from the 2010 season, while Penn State was forced to vacate all of its wins from 1998-2011 (although these wins were later restored in 2015).

The O’Brien Era at Penn State lasted a mere two seasons, as he was hired as to be the head coach of the NFL’s Houston Texans in 2014. O’Brien’s teams lost twice to the Buckeyes, with the 63-14 result in 2013 representing Penn State’s worst loss, and most points scored against the team, since 1899. O’Brien was replaced by former Vanderbilt head coach James Franklin in January 2014. The Buckeyes would win in Franklin’s first two seasons, but in 2016, in a heart-breaker for the Buckeyes a blocked punt and blocked field goal helped Penn State upset the #2 ranked Buckeyes, 24-21. Penn State would go on to win the conference championship, though the Buckeyes found their way into the CFP.

The two programs are two of the best in the nation. In the course of the Poll based era (1936-Present) the Buckeyes were listed as number one six times (’42, ’54, ’57, ’68, 2002 & 2014). Though it is almost as if “depends upon who you ask because some listed the Buckeyes as National Champions eight times (including the seasons of ’61 & ’70). Penn State in this era has been listed as number one twice (’82 & ’86). Penn State does lead the Buckeyes in perfect seasons with seven; the Buckeyes have had Ten undefeated season, though on six of which are perfect (No losses or ties).

A lot can be said here – two is McSorley and Barkley. Their victory last year was a thunderous asterisk for the Buckeyes. Penn State has talked of the snub into the CFP’s all last winter, spring, and summer. They are out to make a statement. For the Buckeyes three things can be said – JT, Dobbins, and Weber. The Buckeyes have heard the chatter since last year following their embarrassing defeat by the eventual National Champions – Clemson. They have something to clear up come Saturday. There will be no “white-out” as the game is being played in The Shoe.

I would love to conclude that the Buckeyes will silence the Nittany Lions, especially following their sounding defeat of the TTUN last weekend. Allow us to remember that the loudest thumps of the chest often wither in the loudness of their over-hyped masculinity. But I must be honest – I am a tad nervous ….

And allow me to tell you why that is a good thing …. When I get nervous and lack the confidence of my Buckeyes they always go out and surprise the living day-lights out of me and win in a “wondrous” way. So I will simply yield from the temptation to display my loudness and over-hyped masculinity – professing a victory for the Scarlet and Gray and just stay nervous, and lack confidence – which is true – and allow the game to go as it may.

Besides it won’t be the end of the world – unless your name is Harvey or Donald.