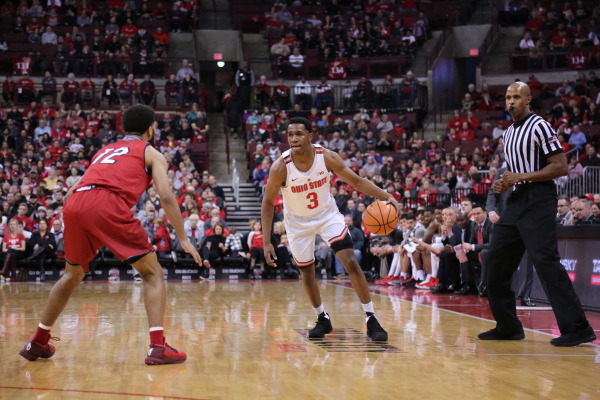 The Buckeyes (11-4) continued their run with a harder than it needed to be 72-59 win over Miami (OH) (7-6) Sunday afternoon at VCA. This was Ohio State’s last non-con game before resuming conference play against Iowa on Thursday. The Buckeyes were 6-1 (2-0 B1G) in December games. Now, Ohio State goes full throttle in conference games for the next two months.

The Buckeyes and Redhawks were tied at 4-4 at the 16:12 mark in the first half and Ohio State struggled to pull away from Miami until late in the game.

Although the Buckeyes were pretty flat throughout the game, they did saddle up for one last scoring run late in the game to salt away a too-close game. They were persistent enough to fend off several Redhawk runs throughout the game.

Ohio State ramped up the defensive pressure in the 2nd half by holding Miami to 35% shooting from the field and 25% from 3-point range.

Their ball handling was still at a pretty decent level. The 11 turnovers were okay and offset by 10 assists, 6 by CJ Jackson.

The basketball team must have been exhausted from celebrating the football team’s Cotton Bowl victory. They started out sluggish and didn’t improve their energy level that much throughout the game. This was reflected in their level of play.

The 72 points isn’t too far below their average, but their shooting was not up to standard. In fact, in the first half, it was terrible – 38% terrible.

The Buckeyes were out-rebounded by Miami 38-36. Of OSU’s 9 offensive rebounds, Kaleb Wesson grabbed 4.

The Buckeyes open Big Ten play, part the 2nd. on Thursday with a trip to Iowa City to play the Hawkeyes. The tip-off is scheduled for 7:00 pm ET. It can be seen on ESPNU and/or you can listen to it on 97.1.

‘*Iowa has a game against Michigan on Tuesday, January 2nd.