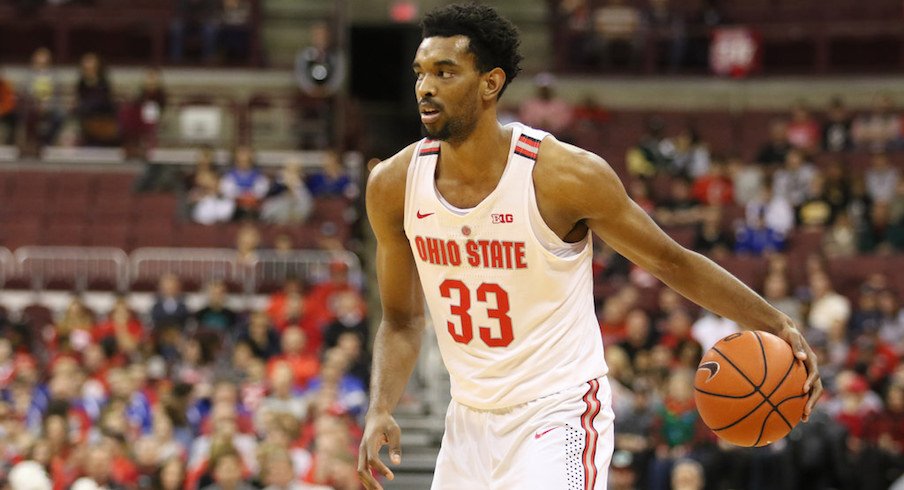 The Big Ten’s first place team, The Buckeye’s, have now withered, somewhat miserably, into second place – as the season winds down. Their loss to TTUN in Ann Arbor Sunday (02/18/18) 74-62, has brought into focus questions we are have undeniably possessed throughout this seemingly miraculous season – ‘ignoring that this was the same “imperfect team” of a year-ago’ that suddenly meshed into a 1980 ‘Miracle-on-the-Ice’ type of team.’ Has reality come to roost? Or is it based on similarities to the recent Market crash and what experts call “a correction.”

Honesty? Who among us “truly believed” that the Buckeyes would finish at 17-1, or even 16-2? Undoubtedly, we all hoped for it …. I know I certainly did. But believe it? Honesty? No.

Any Buckeye team before that to lose two games or less was back in the 1970-71 season.

The positive here – is the Buckeyes have exceeded expectations. At the beginning of the season they were picked to finish 11th within League play. That’s not happening … but first place? Most likely not happening either.

The Ohio State University was ranked No. 8 in the nation upon entrance into this game against TTUN, who was listed at 22nd nationally. Both the Buckeyes and Wolverines were 22-7. The Buckeyes seemingly swept the attention of enthusiasts within the press with their surprising play in a season loaded with “good” teams, but none dominant, or clearly in a seat to go all the way come March. Honesty? They were clearly over-ranked. I saw some early predictions of seating’s in the March Madness extravaganza, that sat the Buckeyes at a Four seed in the bracket’s. Now as a Buckeye fan – I loved it – and my hopes soared. But, perhaps the per-thought in this angling was that the Buckeyes were ahead of or tied with Michigan State in the standings – but not so after Sunday, I hate to say this – but they are just not quite on the Spartans’ level, even while owning a head-to-head win over them.  But miracles do happen, you know!

Then came those pesky road-kill varmints from TTUN …

The Wolverines are 11-5 in Big Ten play, splitting with Ohio State, beating Michigan State, losing two close ones to Purdue, falling by 9 at Northwestern and getting blown out at Nebraska.

Ohio State is 13-3 in Big Ten play, splitting with Michigan, beating Michigan State, winning a close one at Purdue, falling to Penn State in a thriller, and then getting dominated by the same Penn State team.

Andrew Dakich, a walk-on at TTUN played 203 minutes total in three seasons with them. He would leave Ann Arbor looking for some time on the court. The Buckeyes, desperate for some effective guards, brought him into the Scarlet and Gray fold. As a Buckeye, Dakich, has played in 530 minutes thus far this season.

In this loss Jae’Sean Tate, I believe had the best response: “I don’t think there’s any need to freak out,” Tate said. “I think, what, we’re 13-3 in the Big Ten? That’s still saying something and we’ve still got two more ahead. “I think we’re still going to be able to make the tournament…”

“We haven’t had a whole lot of adversity through the Big Ten season,” coach Chris Holtmann said. “But everybody goes through this. This is what we signed up for.”

So Holtmann said he’s somewhere between chalking up two losses in four days at Penn State and Michigan to life in the Big Ten and thinking the Buckeyes have a lot of things they need to quickly fix. Not terrible losses … but losses all the same, ones that do not help the psych either.

“I think the reality is if you go through a power conference unscathed, then you’ve got one heck of a team, and by unscathed, I mean a loss or two,” Holtmann said. “Having said that, we have to correct some things and improve in some areas. I think we did some good things today. I don’t want to take away from anything some of our guys did. Michigan just played better today.”

True Coach, they did!

Possible Big Ten Player of the Year candidate Keita Bates-Diop has looked tired in the last two games (both losses) in what appears to be front-rimming shots while shooting just 10 of 28 in these two games. The funny thing is he isn’t even in the top 10 within League play in minutes. Coach Holtmann has certainly handled him well, which has allowed him to “literally’ carry the offense … so, with a deep breath, we know he’ll be fine.

Defenses are catching up with the Buckeyes’ ball-handling issues too, along with their lack of back court depth. This cannot be repaired. Holtmann’s challenge is to work around it – manage it – which, stop freaking out Buckeye Nation, he will. Coach Holtmann is a good coach.

Someone besides Tate and Bates-Diop has to score against top-25 teams. Kaleb Wesson, C.J. Jackson and Kam Williams combined for 15 points Sunday. They average a combined 31. They’ve been better in the past. It’s time to step up!

Jae’Sean Tate led the Buckeyes in this loss up north with 20 points in 36 minutes of play. He would also own the boards for the Scarlet and Gray with 15 snatched. Keita Bates-Diop would chime in with 17 points, also in 36 minutes of play. It is not enough when only two players seemingly are consistent … thrills will happen, but trophies will not be brought into possession.

“I think we’re fine, I think we’re fine,” said Holtmann, who wasn’t as ticked in the postgame as he was after the other two-game losing streak this season, when the Buckeyes followed an unraveling at Butler with a 14-point home loss to Clemson.

“If this beats us down, shame on us.” He would add.