The Buckeyes sent a 6-player team to the Bearcat Invitational at Coldstream CC in Cincinnati, OH. Additionally, Ohio State will be sending players to play as Individuals to the Inverness Intercollegiate at the Inverness Club in Toledo, OH.

That was the plan. However, due to heavy rains, the Bearcat Invitational was cancelled. So, off we go to Toledo…

The following players represented the Buckeyes in Individual play.

So, on to the players…

Colin managed to put an impressive start to his opening round. Beginning his round on the 16th hole, Colin opened birdie-birdie, then birdied hole #3 to get to -3 through 6 holes!. That’s quite a start. In Colin’s second round, it was (mostly) bogeys and a lot of pars. To his credit, nothing higher than a bogey on his card. His final round was probably his best round; 1 birdie, four bogeys and 13 pars. Nice, steady play to wrap up the tournament. 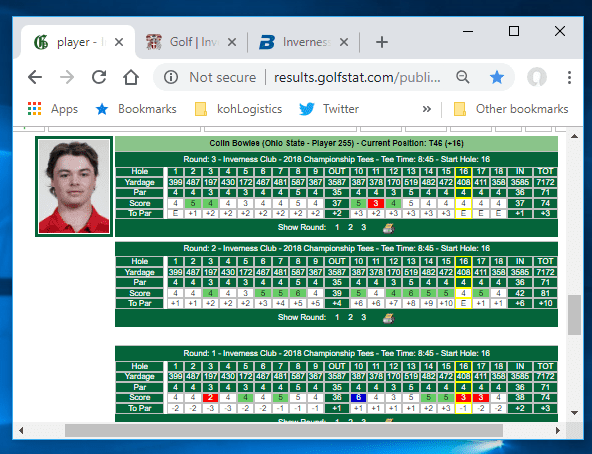 Jack opened play on hole #17 and got off to a rough start. Through his first nine holes, he was +7. Jack righted the ship to play his closing nine holes in level par. In his second round, Jack had a handful of bogeys, but cared two birdies to help his score. The third round was similar to his second round, without the birdies. In his final two rounds, Jack did a nice job of keeping his game under control by scoring no higher than a bogey. He may not have made that many birdies, but he didn’t fritter away strokes, either. Nice work. 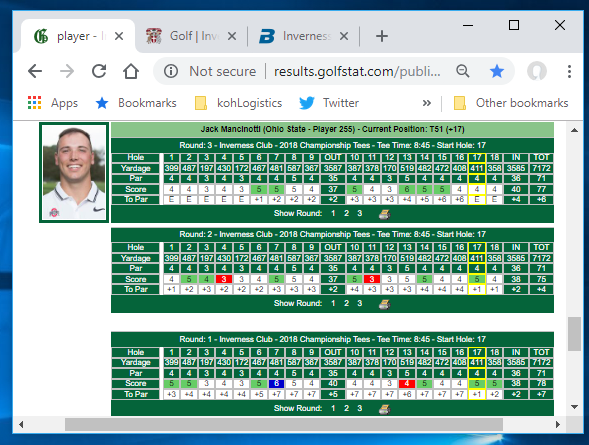 Justin began his play on the 18th hole with a bit of symmetry by opening with three bogeys, then closing his round with three bogeys. His second round was similar to Colin’s; mostly bogeys and the rest pars. His final round was more exciting with 2 birdies and 2 double bogeys. 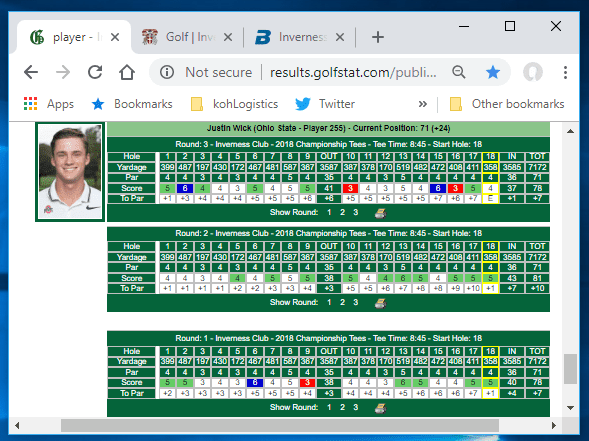 If you think the scores seemed a bit high, it’s because they were. Wet, soaking conditions will do that. I want to contrast this year’s Inverness to last year’s. In 2017, the first day (2 rounds) were played in comparatively good weather. The median score was 219* (*2 rounds extrapolated into 3 rounds) and there were 15 golfers under par. This year, in considerably wetter conditions, the median score was 227 and only one payer was under par.

There are a couple challenges to playing passable golf in soaking conditions.

Additionally, the bottom of your swing arc changes. When you are on wet, soft ground, your body weight will cause to to “sink” into the ground a fraction of an inch. This can cause the club hitting the ground before it hits the ball – a fat hit.

A simple way to compensate is to grip down the shaft a bit. But you need to get that right or the result will be hitting the ball too close to its equator and hit “thin” shots. There is more to this, but I think you’ve got the gist.

The OSUMG team heads for the Nike Collegiate Invitational to be played September 30 – October 2. The event will be at Ben Hogan’s place; Colonial Country Club in Ft. Worth, TX.

The OSUWG team heads to the Chicago area for the Windy City Classic scheduled for October 1-2. The event will be held at the Glen View Club located, appropriately enough, in Golf, IL.