The Buckeyes are in Cle Elum (not a typo) WA for NCAA Regional play. The host course is Tumble Creek Golf Club.

The 18 team field and their Golfstat Top-50  rankings:

Here’s link to Round 1 and Round 2 recaps.

Ohio State mounted a late surge but came up a stroke short in Wednesday’s final round to finish the tournament at 875 (+11) and missing the cutoff by a single stroke.  Their final round of 287 (-1) was by far their best of the tournament and it almost enabled them to advance to the NCAA Finals.

There was actually quite a bit of drama as this round unfolded. Ohio State entered the 3rd round in a tie for 6th place with UCF. The teams were 2 strokes behind Northwestern and 1 stroke up on Oregon State. Play began, and:

Unfortunately, the Buckeyes couldn’t overtake UCF and they finished 7th. However, there was some good news. In addition to the top six teams, the top three individuals, not on an advancing team, also qualify to play in the Championship. Aneka’s score was 2nd best of non-team qualifying players, so off she goes to the finals to play as an Individual.

Although the finish was just short of advancing to the Championships, there has got to be a feeling of optimism in the OSUWG program. Look at the lineup: one senior, one sophomore and three freshmen. Niki is the only team member that will be lost through graduation for next season. This young team is pretty good and they got just a little taste of the national stage. 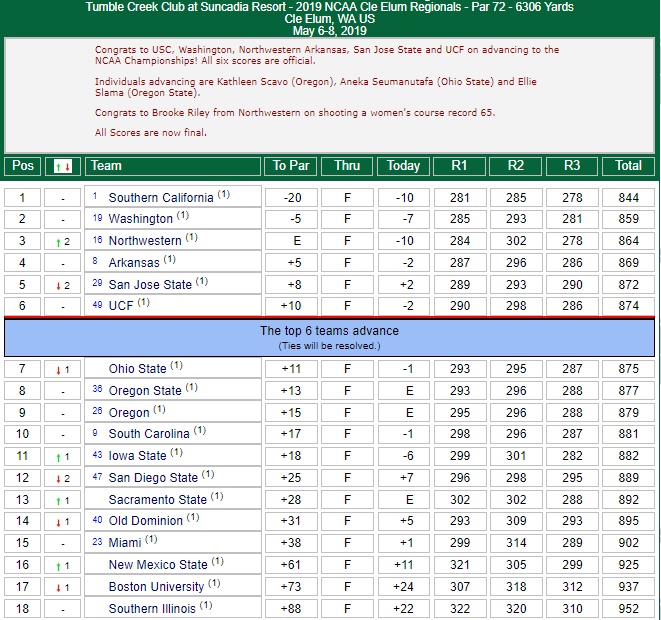 For the 3rd round, Aneka Seumanutafa and Niki Schroeder led the Buckeyes with each shooting 71 (-1). Yukie Sasaki had a 72 (E) and Skylar Thompson a 73 (+1) to account for team scoring for the day. Lauren Peter shot a 77 (+5) to wrap up Buckeye scoring.

Again, Aneka started steady and finished strongly. She was -2 through six holes and -1 at the turn. Bogeys at #12 – #13 moved her to +1, but Aneka birdied two for her final five holes for a round of 71 (-1), her third consecutive sub-par round of the tournament.

Niki had a solid start to her final round. She was -1 through eight holes and even par at the turn. She had a nice round going and stood at +1 through 17 holes. Then, boom, she eagled the par-5 18th hole; her final hole of the tournament to finish with a 71 (-1).

Lauren had trouble getting out of the gates in her final round. She opened with a double bogey and was +5 at the turn; not the best of starts. However, she picked things up with birdies on two for her last three holes for a very positive finish. Lauren fired away for the entire eighteen holes and was rewarded with a nice finish.

In the final round, Yukie had a lot of excitement in an even par round of 72. She holed out from the fairway for an eagle on the par-4 3rd hole (her 2nd eagle of the tournament). She mixed in a couple bogeys, then birdied #8 to make the turn at level par. Yukie bogeyed #10 and #11, then played her next six holes in -3, bogeyed #18 and walked off the course with a smooth 72.

In the final round, Skylar again had a tale of two nines. After birdieing the 6th hole, she made three consecutive bogeys to make the turn at +4. Her back nine was much more fun; Skylar had 3 birdies and 6 pars for a round of 73 (+1). She birdied 2 of the final four holes in Ohio State’s stretch run.

Below is a frequency table of how the Buckeyes scored, such as number of birdies, number of pars, etc.

May 17 – 22 is NCAA DI Women’s Golf Championship in Fayetteville, AR.