The Ohio State Women’s Golf (OSUWG) team were in Chicago, IL for the Windy City Collegiate at the Glen View Golf Club.

Schedule: Thirty-six  holes on Monday followed by 18 holes on Tuesday.

The Buckeyes finished in 12th place with a three round aggregate score of 299-297-290 = 886 (+22). For the second consecutive tournament, the team but showed round over round improvement. 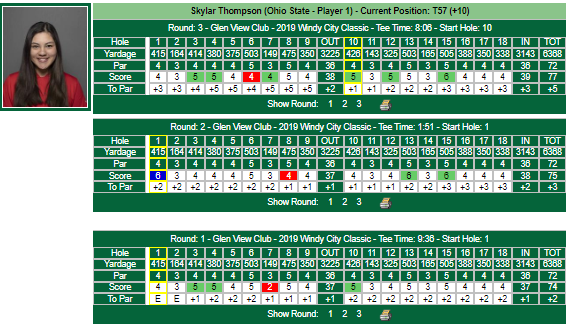 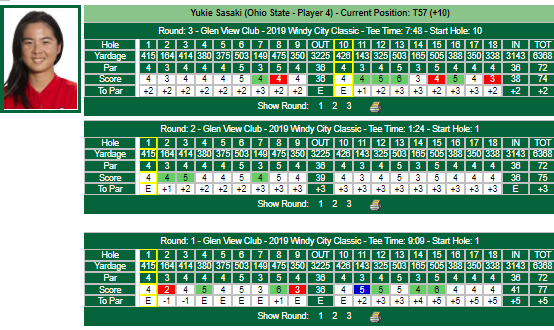 Below is the score-to-par table. You can see that as the tournament progressed, they had more holes of “par or better” per round, particularly the higher number of birdies in the final round.

Things are pretty much wrapping up for the season. Due to some personal business, I’m “ball in pocket” for the next two weeks. Hopefully we get some dry, temperate mid-October weather so I can get a couple more rounds in.

Although I dislike practicing, about a month ago I spent some time on the practice green working on various chip/pitch shots. Unsurprisingly, my best three rounds of the summer (78, 84, 83) followed. I mention this because a few year ago, in a conversation with OSUWG coach Therese Hession, I asked her what her focus was on at practices. She replied, “short game and game management”. Based on my anecdotal results, she appears to be right.

At about the time I was working on my short game, I needed to work on my iron play, which was a shambles. Rather than beat balls at the range, I left my woods in my car trunk and played nine holes with only my irons.  I scored just as well (42) as with a full set of clubs and my iron play is back to where it used to be.

The Buckeyes travel to Chapel Hill, NC for the Tar Heel Invitational. The event is scheduled for Friday, October 11 – Sunday October 13th.