The #5 Ohio State Buckeyes (10-1, 1-1) hoped to rebound after Minnesota took them to the woodshed Sunday evening. They did so, with an 80-38 victory over Southeast Missouri State (3-8).

The Buckeyes started the game looking like they were still hungover from the Minnesota debacle. By the midpoint of the first half, they trailed 12-13. They had turned the ball over 11 times. In 10 minutes. Their shooting was good, 5-8, but when your turnovers are 2X your made FG, your offense is pretty dysfunctional at that point.

Fortunately, Ohio State was less generous with the ball in the remaining ten minutes with only two turnovers, went 9-14 from the field and took a 36-25 lead by halftime.

This game had an odd feel to it. In a lot of ways, once we get past the initial ten minutes, it resembled Sunday’s game against Minnesota, with Ohio State playing the role of Minnesota on Tuesday. The Buckeyes were very aggressive rebounding and once the shots started to fall, had a lot of confidence in their offense. The torrid outside shooting was complemented by impressive ball movement and “looking for the open man” style of play. The Buckeyes were actually playing basketball and enjoying themselves.

The Buckeyes had four players in double figures, paced by Kaleb Wesson’s 18 points. Andre Wesson had 14, while Kyle Young and D. J. Carton had 10 each.  Nine of the twelve players scored for Ohio State. Kaleb earned a double-double with a game high 10 rebounds and CJ Walker had a game high 6 assists. Kyle, with 9 rebounds, was one short of his double-double. Wouldn’t that have been something?

The Redhawks had two players in double figures. DQ Nicholas and Isiah Gamble each had 10 points. Sage Tolbert had 6 rebounds and Quatarrius Evans 2 assists.

You’ll notice that SEMS had ~20% more FG attempts than Ohio State. Turnovers have that effect.

Damned near everything. The offense was efficient and balanced. Fifteen of OSU’s 31 field goals were assisted. Ohio State had four players in double figures but everyone who played, but for one player, Alonzo Gaffney, scored. Alonzo had no FG nor FT shots in his playing time, so that’s understandable.  Scroll through the box score, below, you see how it happened. The six players who scored in single digits accounted for 36 points, 6 points apiece.

Bench play was again solid. This number is skewed quite a bit due to Andre Wesson’s performance, but still…  In 71 minutes of game time, the non-starters accounted for 32 points, 9 rebounds and 3 assists. Bench play was sparse against Penn State since the Buckeyes didn’t really put this game away until the last 5-6 minutes or so.

Team defense continues to be stellar. Despite giving up 74 points to PSU, Ohio State is now #3 in the country in scoring defense, allowing 54.7 PPG. Last season, they allowed 66.2 PPG. Granted, the schedule gets tougher, for them, but it gets tougher for everyone.

They won, again. That always counts for something.

Turnovers, oh my god, the turnovers. SEMS’s on-ball defense caused OSU to turn the ball over  season high 21 times, 13 in the first half. Fortunately, SEMS refused to convert these to points scoring only 3 points off turnovers.  Ohio State needs to clean this nonsense up in a hurry before Saturday’s game against Kentucky. SEMS may have given the Wildcats a template to use…

The 58% (7-12) free throw shooting is terrible. They were 2-6 in the first half. Two of OSU’s four first half misses were front ends of 1-and-1 opportunities. It’s okay to leave points on the floor when you end up winning by 32, but as mentioned in third point, below, the fun times are over. 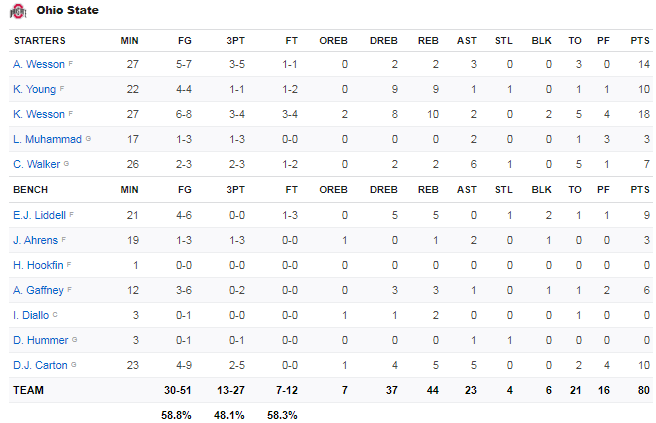 The Buckeyes travel Las Vegas this weekend for the CBS Sports Classic. Their opponent is the #6 Kentucky Wildcats. Tip-off is 5:15 pm ET on Saturday, December 21st at T-Mobile Arena. You can watch the game on CBS, obviously, or listen to it on TuneIn. Or both.